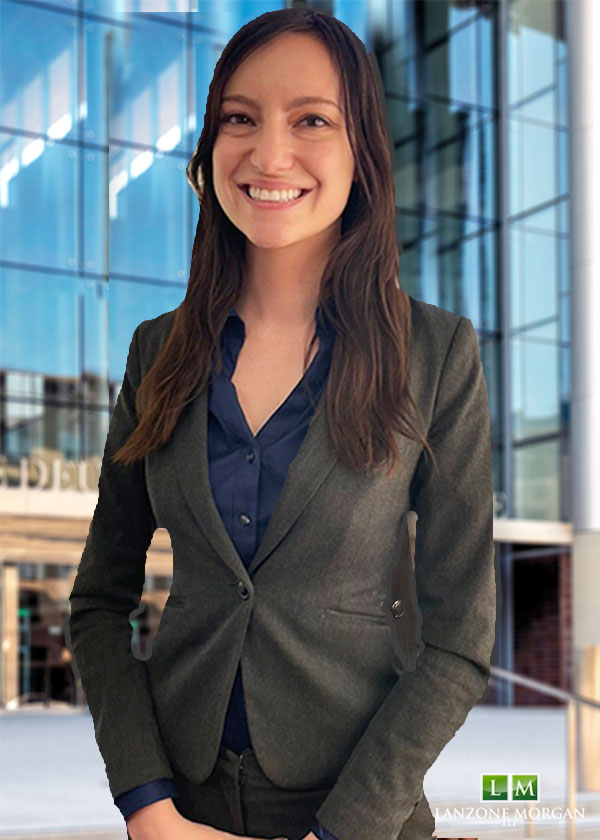 In 2020, Sara Feldman became Lanzone Morgan, LLP’s newest attorney. After working at a catastrophic personal injury firm, Sara was eager to find another firm where she can use her place of privilege and education to be an advocate for those who do not have the same opportunities or circumstances.

Originally, Sara attended Cal Poly San Luis Obispo to study Animal Science. She volunteered at an animal clinic for 3 years and operated as a veterinary technician, preparing for her career as a veterinarian. However, Sara encountered obstacles in her education limiting her ability to excel in a science-driven career. An attorney who was also a close family friend suggested Sara explore law and allowed her to accompany them to their trials. Sara describes the first time watching a trial as “intoxicating,” finding herself immersed in the puzzles of reading the jury, nuanced evidentiary issues and theatrical nature. Sara’s drive to practice law was set in stone when the plaintiff expressed how Sara’s comfort and presence allowed her to survive the trial. The plaintiff did not have many supporters and Sara realized that those who do not have strong voices or a large support system are reliant upon others to guide them through the difficult process. Following the trial, Sara immediately switched her major to Political Science with a concentration in Pre-Law, became a Legal Secretary for the family friend who had gotten her into law and later became a judicial intern for Hon. Ginger E. Garrett and Hon. Lloyd Nash. She demonstrated her appreciation for her education and opportunities to the fullest, graduating cum laude with honors. Following her undergraduate education, Sara attended Chapman University Fowler School of Law on a full merit scholarship. At Chapman, she participated in the Alternative Dispute Resolution Competition team and American Constitutional Society. Sara also worked as a secretary for OUTLaw, an LGBT ally/support group on campus, and became a mentor for incoming law students. Her work did not stop there; she was the research assistant for the Associate Dean of Academic Affairs for a project about immigration law, an Academic Fellow for Evidence, a fellow for the Orange County Trial Lawyers Association, a Law Clerk at various firms, and participated in the Criminal Justice Dispute Resolution Clinic and Alona Cortese Elder Law Clinic. Her academics reflected the effort she put forth as she received six CALI awards for earning the highest grade in each class, graduating in the top 15% overall.

In addition to her time at Alona Cortese Elder Law Clinic, Sara wanted to work in elder law for a more personal reason; her grandmother, who had dementia, lived in an assisted living facility where she was terribly treated. The trauma from witnessing the horrible standards by which such an important figure in her life was treated motivates her to fight for elders every day.

The passion for her work is evident in her productivity and character. Sara personally attacks each case as if it were for her grandma. She believes that everyone deserves the same help and care regardless of whether they have the support system to help them. Sara wants to touch as many lives as possible throughout her career and bring peace to families through extremely difficult times. Although her time at Lanzone Morgan has not been long, Sara is already establishing a lasting, positive impact on her colleagues and clients.