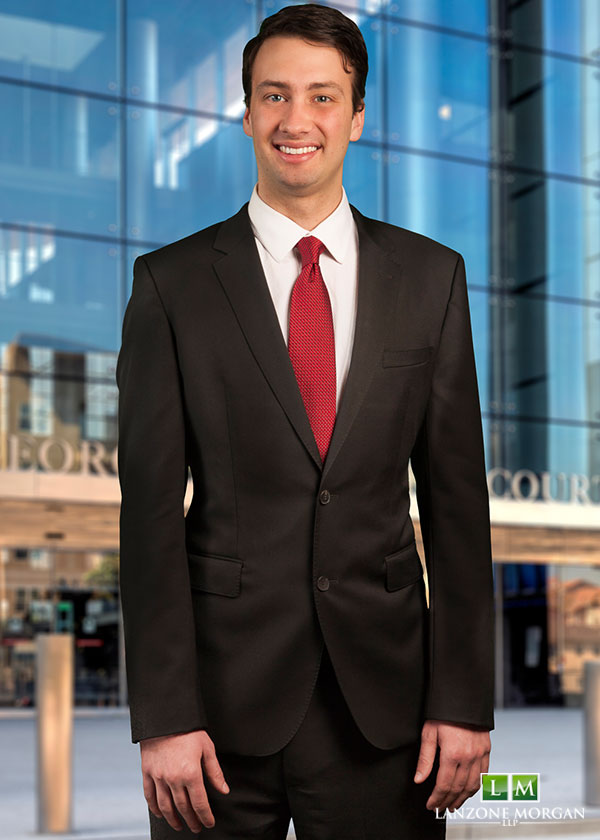 Taylor Wall is one of Lanzone Morgan’s newest attorneys, originally joining as a law clerk in 2019. Taylor went to the University of California, Riverside, where he received his B.A. in Psychology: Law in Society before he earned his J.D. from Chapman University Fowler School of Law. Taylor grew up in Orange County, CA surrounded by birds, cats, dogs, horses, fish, turtles and various other animals on his family property. Both his father and mother are attorneys, but it was not until he was in college that Taylor decided to go to law school.

In addition to following his parents’ path down the legal field, Taylor also looked to his father for inspiration in hard times. Taylor’s father was a farmer’s boy in North Dakota who worked extremely hard to get to law school. Throughout law school, Taylor’s father also balanced a wife and family along with two full-time jobs delivering milk and loading freight trains. Eventually, Taylor’s father opened his own law firm, inspiring Taylor to work hard towards his goals. As a law clerk, Taylor gained an impressive amount of experience and exposure to civil ligation, and is extremely proud of the opportunities that Lanzone Morgan has made possible.

Prior to Lanzone Morgan, Taylor worked as a law clerk at another elder abuse firm through law school. He also volunteered at the Elder Law Center on campus, helping indignant clients in matters pertaining to elders and dependent adults. This included obtaining/combating conservatorships, drafting wills, and spotting potential financial abuse.

Taylor did not know he wanted to work in elder abuse until college, after his own loved one experienced mistreatment herself. Taylor’s grandmother had a “boyfriend” that stole money and belongings from her in order to pay for drinking and gambling. As a result, Taylor’s family had to take in his grandmother to prevent further abuse. During this time, Taylor provided basic care and support for his grandmother, and began to understand just how vulnerable elders are.

Throughout his career, Taylor hopes to no longer have a job because people no longer need an elder abuse attorney. By this, Taylor means that obtaining favorable results in elder abuse cases will result in defendants being less inclined to commit elder abuse in the future, thus preventing potential cases from occurring in the first place. If there are less cases, then the system is improving, or people are doing something right. Until then, however, Taylor hopes to continue working at Lanzone Morgan because he loves the people he works with. Partners, Anthony and Jim, let him experience a lot of opportunities that others in his position would not be allowed to do. They guide him, helping him to grow as an attorney. Taylor also truly appreciates attorneys Ayman Mourad and Reza Sobati for their welcoming guidance.