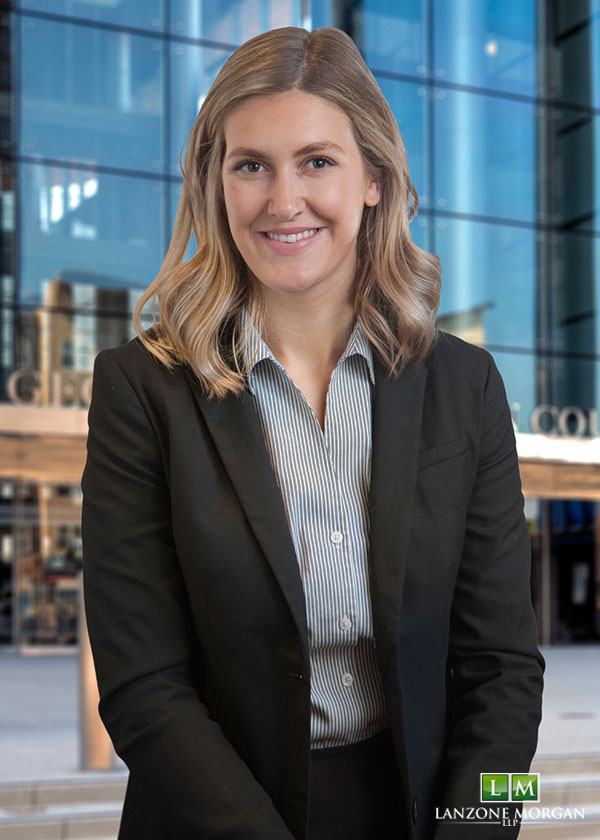 Suzanne Voas became an attorney at Lanzone Morgan, LLP in November, 2021.  She originally joined the Lanzone Morgan team in May 2019, as a law clerk following her first year of law school.  Suzanne graduated in the top 20% of her class from Chapman University Dale E. Fowler School of Law in 2021 with a degree emphasis in Advocacy and Dispute Resolution.  During law school, Suzanne served as Academic Fellow for Professor Henry Noyes.  She received four CALI awards for receiving the highest grade in a course.  Prior to law school, she received a B.A. in English Literature from Arizona State University, during which time she spent a semester studying Medieval Renaissance Literature at The University of Oxford.

Suzanne was raised in Phoenix, Arizona, with three older brothers.  As the youngest sibling, Suzanne learned early on to stand up for herself, but also the value of having someone to stand up for you.  Growing up, she spent many summer days at the newspaper of which her father was the editor, in the classroom where her mother taught English to refugees from around the world, or at one of her many sports practices and games.  She believes the exposure to different environments and people from all walks of life allowed her to develop empathy and respect for everyone, regardless of race, age, gender, religion, national origin, disability, wealth, or education.

Suzanne became an attorney because she recognized that she could make a difference in the lives of those in need, while simultaneously impacting systemic issues on a larger scale.  She is passionate about standing up to corporate greed and protecting those who fall victim to the broken healthcare system.  As an attorney at Lanzone Morgan, LLP, Suzanne hopes to continue to hold nursing homes and other inadequate care facilities accountable for the abuse and neglect they inflict on our communities’ beloved elders.  She knows the work of the devoted team at Lanzone Morgan, LLP will continue to transform elder care throughout California.  Suzanne continues to be inspired by the hard work and dedication of everyone at Lanzone Morgan, LLP.  She knows that Jim and Anthony will do anything for their clients, and pride themselves on constantly innovating and forming creative solutions to bring justice to the most amount of people possible.  Suzanne tries to live by the saying that “there are no shortcuts to any place worth going,” and she knows the entire firm embodies that notion.