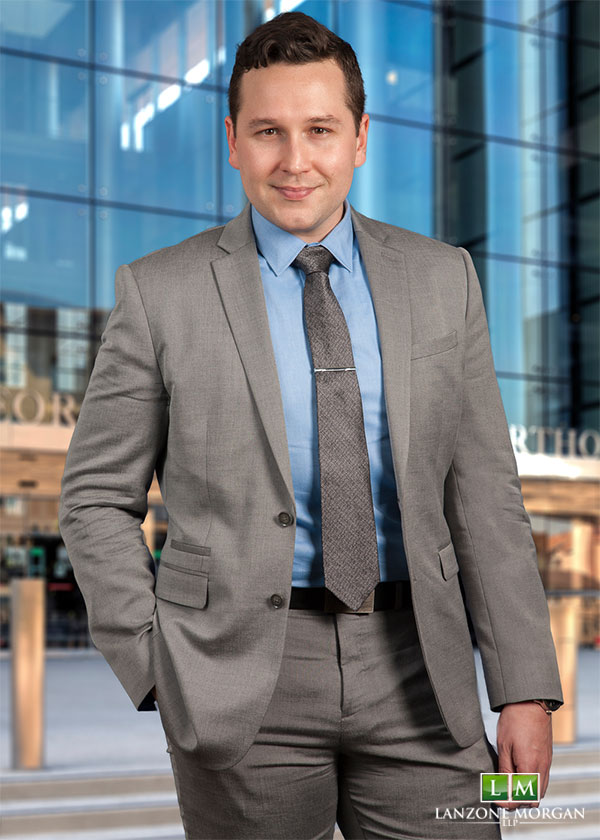 In 2019, Alexander S. Rynerson joined Lanzone Morgan’s team of attorneys and brought his extensive legal experience and diverse career background with him. He is licensed to practice in all California state courts and the Central District of California.

Prior to becoming an attorney, Alexander explored a variety of careers, including rescue SCUBA diving and instruction, construction, teaching choir, and community outreach services through the Los Angeles Opera. Through these experiences, Alexander realized that his true passion lay in helping others navigate through the most difficult moments in their lives.

During his time as a rescue scuba diver, Alexander found a new approach to living. He recalls the first time he saved someone’s life; the sheer gratitude and relief on their face was the most rewarding experience of his life at the time. At that moment, he stopped living merely for himself and started living to do for others. However, he knew that he needed to make an impact in a broader way. Reminiscing to those moments when his parents played the OJ Simpson trials on the television and his days playing “mock court room” with his stuffed chicken, Marcia “Cluck,” Alexander realized that the best avenue for him to effect change lay in the legal profession.

Alexander received his Juris Doctor from Chapman University Fowler School of Law, where he was a member of the Public Interest Law Foundation and a member of the Moot Court, Mock Trial, and the Alternative Dispute Resolution teams. During law school, Alexander worked at Bet Tzedek, specializing in after care rights (rights of the terminally disabled), the Alona Cortese Elder Law Center at Chapman University, and the Office of the Los Angeles County District Attorney assigned to the Victim Impact Program which specializes in assisting those victims most susceptible to predation – children, domestic partner, the developmentally disabled, and the elderly – which allowed him to make over 50 court appearances as a law student, including a number of trials. Further, he was blessed with the opportunity to practice in the field of Government Entity Liability in numerous Federal and State matters, including a number of successful trials. After law school, he served as a Deputy District Attorney for San Bernardino before coming to Lanzone Morgan to pursue his passion for helping others.

In addition to his experience, Alexander also has an array of talents such as surfing, scuba diving, skiing, kayaking, diving, spearfishing, singing, playing a number of instruments – saxophone, piano, the Irish flute, the Irish whistle, the uilleann pipes, guitar, harp, clarinet, oboe – and can speak several languages in addition to English – French, German and Russian.

For each chapter in his life, Alexander works to commit 100% of himself to everything he does. He praises his mentors for defining each period of his life, most notably, his grandparents. Alexander’s grandmother was the first female mayor of Lakewood, California, where the city even has a park named after her. He credits her with teaching him to give back to society for the gifts that society has given him. Alexander praises his grandfather for instilling a sense of curiosity and teaching him to pursue his interests no matter the difficulty or timing. Ultimately, Alexander owes everything that he is today to the individuals who helped guide and shape him throughout his life; to them he is eternally grateful.

Alexander came to Lanzone Morgan because nothing gives him greater pleasure than advocating for those who have been taken advantage of – due to disadvantages in means, education, or circumstance – against those who would do wrong. Lanzone Morgan is particularly remarkable for the commitment and passion that each and every member of our team brings to work every day. For Alexander, it is a blessing and a privilege to be counted as a member of that team, and to learn as much as possible from everyone around him and from those he can help.